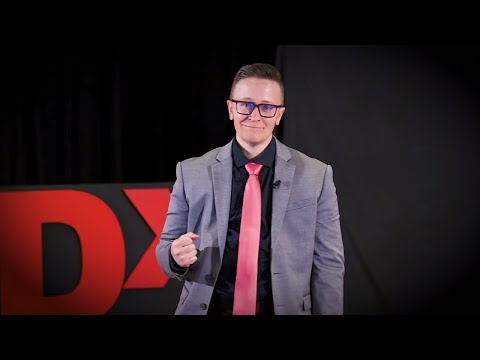 TED & Talks
Share on Facebook
Share on Twitter
Share on Google+
Share on Pinterest
Share on LinkedIn
As a fine artist, activist, and thought leader bringing awareness and recognition to trans and non-binary communities, this cancer survivor is here to talk about the art of radical self-love. Fine artist, designer and muralist, Rae Senarighi is best known for colorful abstracts, intricate typography, and vivid portraiture. Rae began his studies at the University of Montana and finished his BFA at the Art Institute of Seattle in 2009, receiving a Hall of Fame Award in 2010. Rae’s work is influenced by years of scientific illustration, studying the natural world in micro and macro, being published in Cell, Nature and Science magazines.

Rae is a transgender non-binary artist currently based in Madison, WI. His portrait series, TRANSCEND, celebrates transgender / non-binary individuals throughout the world who are living their lives openly, choosing integrity over safety. Since launching his portrait series Rae’s toured nationwide as a visiting lecturer and speaker, hoping to expand trans visibility internationally. This talk was given at a TEDx event using the TED conference format but independently organized by a local community. Learn more at https://www.ted.com/tedx