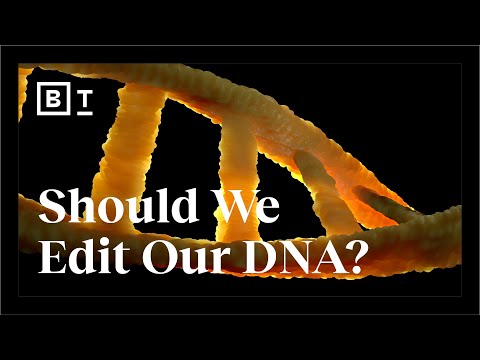 TED & Talks
Share on Facebook
Share on Twitter
Share on Google+
Share on Pinterest
Share on LinkedIn
Mixing human + animal DNA and the future of gene editing
Watch the newest video from Big Think: https://bigth.ink/NewVideo
Learn skills from the world’s top minds at Big Think Edge: https://bigth.ink/Edge
———————————————————————————-
As the material that makes all living things what/who we are, DNA is the key to understanding and changing the world. British geneticist Bryan Sykes and Francis Collins, director of the Human Genome Project, explain how, through gene editing, scientists can better treat illnesses, eradicate diseases, and revolutionize personalized medicine.

But existing and developing gene editing technologies are not without controversies. A major point of debate deals with the idea that gene editing is overstepping natural and ethical boundaries. Just because they can, does that mean that scientists should edit DNA?

Harvard professor Glenn Cohen introduces another subcategory of gene experiments: mixing human and animal DNA. “The question is which are okay, which are not okay, why can we generate some principles,” Cohen says of human-animal chimeras and arguments concerning improving human life versus morality.
———————————————————————————-
TRANSCRIPT:

BRYAN SYKES: Genetics and DNA does get to the central issue of what makes us tick. It’s perhaps too determinist to say that your genes determine everything you do. They don’t, but, if you like, it’s like the deck of cards that you’re dealt at birth. What you do with that deck, like any card game, depends a lot on your choices, but it is influenced by those cards, those genes that you got when you were born.

What I’ve enjoyed about genetics is looking to see what it tells us about where we’ve come from because those pieces of DNA, they came from somewhere. They weren’t just sort of plucked out of the air. They came from ancestors. And it’s a very good way of finding out about your ancestors, not only who they are, but just imagining their lives. You’re made up of DNA from thousands and millions of ancestors who’ve lived in the past, most of them now dead, but they’ve survived, they’ve got through, they’ve passed their DNA onto their children, and it’s come down to you. It doesn’t matter who you are. You could be the President. You could be the Prime Minister. You could be the head of a big corporation. You could be a taxi driver. You could be someone who lives on the street. But the same is true of everybody. I can see a time, long after I’ve gone but when, in fact, everyone will know their relationship to everybody else. It is possible, if anybody wants to do it or can afford it, you could actually, I think, draw the family tree of the entire world by linking up the segments of DNA. So you could find out in what way everyone was related to everybody else.

No doubt, most of the funding for the advances in genetics, for example, the complete sequencing of the human genome, has come from ambition to learn more about health issues. The technology for exploring that, which is making leaps and bounds, has come through the healthcare benefits. Those are the two main things that people are learning about themselves and who they’re related to, where they’ve come from. And that does, and I know from experience, that does add a lot to people’s sense of identity. It’s not for everybody, not everyone’s very interested in it, but a lot of people are and I think that’s a very good thing.

FRANCIS COLLINS: It’s too bad that you can’t actually see DNA easily under a microscope and scan across the double-helix and read out of the sequence of bases that amounts to the information content because it would be easier, I think, to explain then how a geneticist goes about tracking down the molecular bases of a disease at the DNA level. Our methods are indirect. They’re very powerful, they’re very highly accurate, but they’re not as visual as you might like. We do have methods though now that allow you to read out with high accuracy all 3 billion of the letters of the DNA instruction book. Those letters are actually these chemical bases. The chemical language of DNA is a simple one. There’s only four letters in the alphabet. Those bases that we abbreviate, A, C, G, and T. And we have methods of being able to compare then the DNA sequence of people who have a disease versus people who don’t and look for the critical differences in order to nail down something that might be the cause. Well, since, however, we all differ in our DNA sequence by about a half of 1%, you wouldn’t get very far if you basically…

The Plants That Live on Artificial Light (and Why That’s Bad)
How concentrated solar power could fuel the future | Big Think
El reto de la educación ambiental. | Esteban Lara | TEDxCoatzacoalcos
What it is like to have a baby in prison | Jessica Kent | TEDxIndianaUniversity
How to reduce gun violence without taking people’s guns